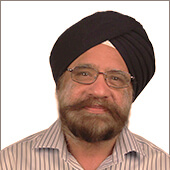 Dr. Jolly was appointed Newport Beach Vice President of Fab Process Engineering and US Integration in 2016. He was named Tower Semiconductor Fellow in December 2013. Previously, he served in various managerial and technical positions in the Operations and Technology Transfer Groups. Prior to joining Jazz, Dr. Jolly held several positions with Mindspeed Technologies, Conexant Systems and Rockwell Semiconductor since 1996 in the area of technology development, where he helped establish industry leading Bipolar, SiGe and BiCMOS technologies. Prior to Rockwell, Dr. Jolly worked at Nortel in Ottawa, Canada in the R&D group where he contributed towards development of several generations of CMOS, Bipolar and BiCMOS processes. He also worked as a Research Associate with the National Research Council of Canada. Dr. Jolly received his Ph.D. in Chemistry from Dalhousie University, Canada and his M.Sc. and B.Sc. from Guru Nanak University in India.